Hey, it’s me again, brian, not kathy. Its been over 2 years since my first (and only) post to the blog. Well… I’m back! Now some of you may be thinking, “What happened to Kathy?” She’s still around, and I’m sure we will continue to hear from her (It is her blog and all), but work has been chaos and I’m going to take over some of the cooking[ref]One night a week, although I consider any night we go out my night too.[/ref], which I guess means some of the blogging too. So, without further ado, onto the food.

A while back[ref]May 31, 2010[/ref] Food Network began a new TV channel entitled Cooking Channel. This “hipper” alternative food station premiered with new chefs and shows we in the US had never heard of: Chuck Hughes, Roger Mooking and Food Jammers. This wasn’t the prim and proper food of Ina Garten, or the butter laden dishes of Paula Deen. It was more exotic, grittier and possibly more authentic, and it was here that we first encountered the italian cooking of David Rocco.Again, this wasn’t the prissy, baby talk italian food of Giada. It was simple, rustic and friendly. When we saw his bolognese sauce for the first time, we decided we needed to make it right away, and we did[ref]Our recipe for bolognese.[/ref], to delighted food coma bliss. We have since purchased one of his cookbooks, Made in Italy, and it was from this that I decided to make dinner.

Spaghetti con Zucchine di Villa Maria, or for those of you like me who don’t speak italian, Villa Maria’s Spaghetti and Zucchini.  The recipe seemed easy, the picture looked delicious and the ingredients called for flavors I’ve never had in a pasta dish as well as the lack of the classic[ref]what we think of as classic: parmesan, red chilies, tomato sauce, basil[/ref] flavors. It called for zucchini, fresh mint, capers and red wine vinegar. Not your usual pasta dish, but I’m up for trying anything[ref]almost[/ref].

My first problem occurred with frying the zucchini, our stove is a glasstop and can’t maintain a constant temperature. It gets scaldingly hot, then shuts off and cools down so low the oil isn’t hot enough to fry, then repeats, ad infinitum. You can use cast iron, or very heavy pots to help maintain a temperature, but you shouldn’t use cast iron on a glasstop. Its annoying. We either end up with burnt uncooked zucchini or limp cooked zucchini, the second being the case for tonight.

The second issue ensued when I was done frying the zucchini. The recipe said to remove the zucchini, turn the pan to low and add the capers and mint. Wait a minute… What do I do with all the oil used to fry the zucchini? Do I just add everything to the oil, or drain off the excess, or dump it and use some new (unburnt) oil. What a conundrum. I opted for the second, dumping the excess oil and leaving enough for tossing the mint and capers in. We will never know if this was the right call, or if I was supposed to end up with noodles swimming in oil.

Thirty minutes later and the dish was finished. It looked pretty good.Not exactly like the picture in the book, but they never do. “How was it?” you ask. Well, it was different. Not bad different, but not the normal american flavor profile for pasta. When you ate all the ingredients together it tasted pretty good, the capers added that nice salty touch. But if any of the ingredients were missing from a forkful, it was a little bland. Kathy commented that she thought it was similar to buttered noodles, but I had to heartily disagree. It was missing any hint of butter and parmesan, and had the added flavor of fresh mint. It definitely wasn’t  buttered noodles. In the end we both ate our plate full of noodles, conveniently decided there wouldn’t be any leftovers for work lunch the next day and that we probably wouldn’t make the dish again in the future.

we are packing for an imminent (we hope) move.  It is a short sale which by it’s own very nature is a long sale.  We packed our books two weeks ago when we thought we would be closing today.  I kept out six cookbooks that I thought I might use for one reason or another.  So far, I have used four and there are supposedly two weeks to go.  I have often read blogs that ask the question, ‘What cookbooks would you keep if you could only have x (10?) number?’   I have not often seen ones that I own or repeatedly turn toward when I am looking for inspiration.  Here are the six on my shelf today.

we looked up ragu and usually it would have a base of carrots, celery, onion, crushed tomatoes and meat.  This recipe from Molto Gusto by Mario Batali isn’t really any of this.  No mise, no tomatoes, no meat.  We tried it out for supper tonight.  It was good.  Not extraordinary, but good.  It’s nice to find full flavored meatless meals.  We had it with a little bit of salad. 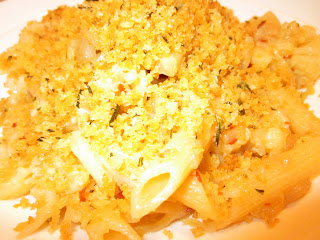 I found the recipe pre-typed on food.com 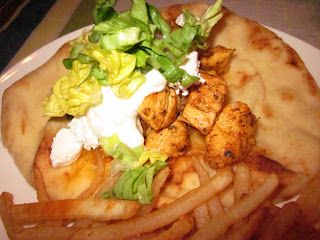 as I rummaged through my cookbooks making my shopping list I ran through the Epcot Food & Wine Fest book.  I saw what looked like a pretty easy recipe with fresh flavors for chicken souvlaki.  We made it tonight and I served it on warm tandoori na’an with crumbled goat cheese and vinegar dressed butter lettuce.  Fantastic fresh and fast Greek food.  Garlic breath notwithstanding.

For the chicken – whisk together all marinade items.  Add chicken chunks and let sit for about 30 minutes.   While chicken marinates, mix all ingredients for tzatziki and hold in fridge.
Preheat large non-stick frying pan with just a touch of olive oil.  Saute chicken until cooked through. 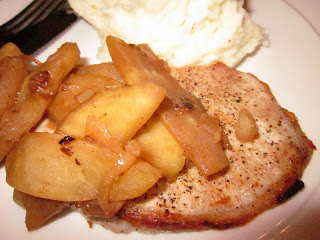 took another cue from Martha this week and made pork chops with apples and shallots.  You broil the chops and saute the shallots with apples and white wine.  We had some whipped potatoes and I had some spinach cooked with a little cream.  Now I feel comfy and warm inside.